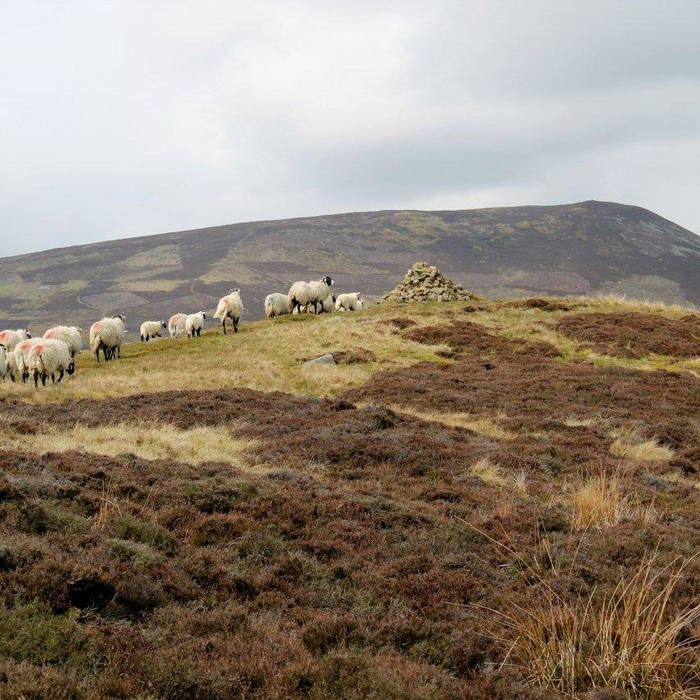 This album is a collection of field recordings from the fells of Cumbria. A county in the far north of England. It is a sparsely populated region and the eastern part of this county is the focus for these recordings. In particular the great northern Pennines which occupy the edges of the counties of Cumbria and Northumberland. This large range of hills stretches up the middle of England from Manchester until the border with Scotland. Often refereed to as "The backbone of England" they are a truly impressive sight.

Fell is another way of saying hill. A fell (from Old Norse fell, fjall, "Mountain") is a high and barren landscape feature, such as a mountain range or moor-covered hill. The term is most often employed in Scandinavia, the Isle of Man, parts of northern England and Scotland.

The fellside is the specific place that I did these recordings. The fellside is the build up to the main fell itslef and has a mixture of sparse woodland, lush valley and animal pasture. It is a diverse ecosystem in itself and a very rewarding area of study for the sound recordist.

This album is a personal piece for me in many ways. In times gone by when I was a young boy I walked this land with my mum and dad. Through the valleys, past the streams, up and down the paths and around the trees. The place enchanted me and I am happy to report it is still the same 30 years on. One trip from childhood stays in my mind more than any other. In this trip I walked up the central path from Cumrew village to Cardunneth Fell, I was too young to reach the top of the fell so my Dad lead me along a parallel valley along the fellside which contained a small stream and lush vegetation in every direction. At one point somewhere along the meandering path of the stream we found a young crayfish that had been washed up on a stone.

Furthermore, my family rests in this place, my grandmother's ashes are in the soil by a sweet chestnut tree as is the body of my favourite pet dog who also passed away around the same time as my grandmother. This is my land and I feel sad when I am far away from it. This is the fellside, this is Cumbria, this other Eden, this blessed plot, this England.

This collection of recordings is dedicated to my Dad who still lives in the area. He loves the fells and their landscape and I am thankful to him for so much as well as passing his love of the fells on to me.

Also, I want to thank my father for his poetry composition "Under Cardunnuth". This poem was written especially for this album.


Under Cardunneth
The Fellside falls
and tumbles down
onto tumbledown walls

Under Cardunneth
The beck tumbles and falls
skimming and skirting
the tumbledown walls,
rapping to curlews
answering their calls

Under Cardunneth
Summer arrives at a very slow pace.
The Month says "I'm June
I'm sorry I'm late
Do forgive me your longish wait
Next year I'll try hard to remember
But you must not forget
that I have to leave in
the month of September
And that I am afraid is
as much you'll get.

Under Cardunneth
The valley's now open
But look up
On the top of Cardunneth
You will espy
the stone cairn at the highpoint
and above it, nothing but sky.

Also, many thanks to Miguel Isaza (Sonic Terrain) for helping with the release of this album. Alen McFadzean from the "Because They Are There" website, for his contribution of the main photograph for this album. For anyone interested in the fells this website is a very interesting source of information about them. becausetheyrethere.com

The word "Beck" which appears in the track listing is the Cumbrian word for stream.

The album was recorded over a period of five weeks in May and June 2015.

Bandcamp Daily  your guide to the world of Bandcamp

Featuring appearances from Kari Faux, Bluestaeb and and interview with NY-bred artist Wiki